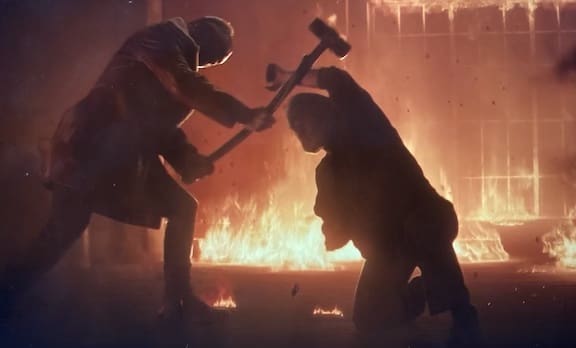 As legend holds in the gritty new movie Samaritan (now steaming on Amazon Prime Video), a hammer hand-forged with brotherly hatred is the only weapon capable of toppling the Granite City superhero known as Samaritan. When that fabled hammer is stolen from a police evidence lock-up 25 years after the final showdown and disappearance of Samaritan and Nemesis (the spiteful brother who created the hammer), it becomes the tool that could bring down or save the city from total chaos and destruction. VIP Fan Auctions is now offering the hard-rubber prop hammer used in the film, including the versions (several were used during filming) that feature the hate-powered red core (click here for photos and more information) and the version of the hammer with a strap (click here) that is used in the climactic final battle (pictured). Visit the Samaritan auction site today to see all the available props, wardrobe and more – and own an authentic prop weapon created by the legendary Weta FX and wielded onscreen by action movie icon Sylvester Stallone!