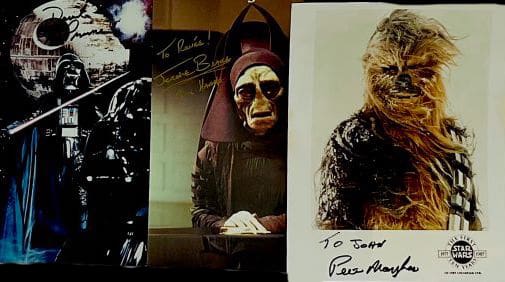 When Star Wars debuted in 1977, no one – including George Lucas – expected it to be a hit (except Steven Spielberg, click here for more on that) let alone a cultural phenomenon whose appeal to audiences would not only endure but continue to expand for decades (with no sign of slowing down). Not surprisingly, Star Wars memorabilia is also enormously popular and several outstanding pieces of autographed artifacts are now available to fans (straight from the legendary private collection of Renee Austin) in the Winter Entertainment Memorabilia Auction from VIP Fan Auctions! Items now on the intergalactic auction block include:

Lando Calrissian: Lando Calrissian was the smoothest operator in Cloud City, and the man who played him, Billy Dee Williams, was a legend in his own right. An autographed photo and action figure (on card) of Lando are offered a set (click here for photos and more information).

Boba Fett, C3P0, Admiral Motti and more: Check out this set of autographed photos from Anthony Daniels (C3P0) and other memorable characters from the Star Wars universe!  Click here for photos and more information.

Visit the VIP Fan Auctions site to see all the available Star Wars memorabilia – and much, much more – and join the bidding today!