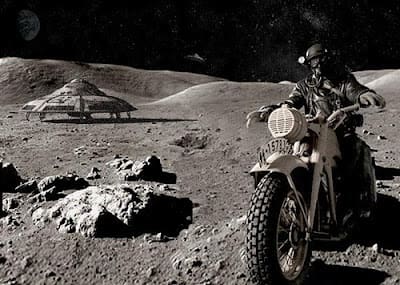 Owning a genuine piece of wardrobe from your favorite film or TV show doesn’t always require multiple rounds of funding from hot-shot producers looking to leave a mark on Hollywood. Right now in the VIP Fan Shop, fans can add to their collections for less than $100 – including some fantastic conversation pieces from big hits and cult curiosities. Here are three interesting pieces now available for less than $40 – no bidding required.

Moon Troopers: In the wild 2012 foreign flick Iron Sky, a secret Nazi space program sets up shop on the dark side of the moon as the Third Reich crumbles in 1945, where they prepare for an invasion of Earth 70 years later – complete with crater-jumping motorcycle-riding stormtroopers (pictured). A moon-biker belt with a hamper/compass logo from the film is available for just $29.95.

Ring, Ring: The wedding ring worn by Zoey’s older brother David (Andrew Leeds) during the second season of Zoey’s Extraordinary Playlist is available along with his red-and-black phone case – for only $35.

Browse the VIP Fan Shop for these and other phenomenal deals and add some Hollywood authenticity to your own wardrobe!