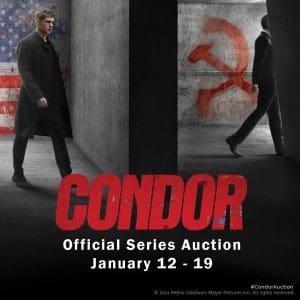 The Condor auction will feature original props, wardrobes, and production material from the series. All items come from the studio and include a Certificate of Authenticity.

Based on the novel Six Days of the Condor by James Grady and screenplay “Three Days of the Condor” by Lorenzo Semple Jr. and David Rayfiel, Condor follows a CIA analyst (Max Irons) who stumbles onto a plan that threatens the lives of millions.

Season 2 of Condor finds Joe Turner (Max Irons) still wandering around Europe, careful not to stay in any one place long enough to put down roots or be a danger to anyone he meets. But while Joe is busy avoiding his past, it catches up with him in the form of a mysterious Russian intelligence officer who claims to be an asset working for Joe’s Uncle Bob. The officer’s life is in danger and he’s willing to trade the identity of a Russian mole in the CIA for safe passage. Joe is reluctant to help – he wants nothing to do with the CIA – but events back home compel Joe to take action and force him to face the life he thought he’d left behind. Produced by MGM Television & Skydance Television, in association with Paramount Television. The series is internationally distributed by MGM.