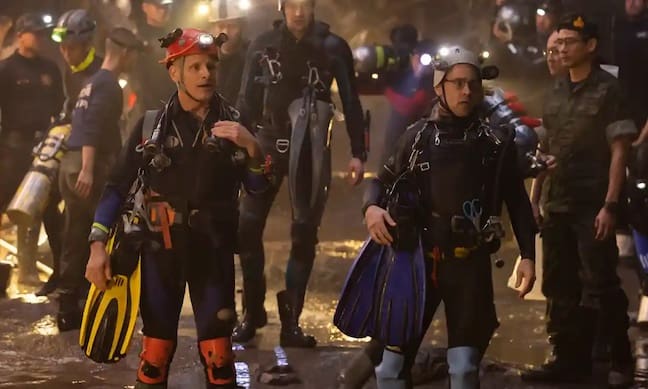 The new movie Thirteen Lives (now streaming on Amazon Prime Video) is a story that captivated the world: a junior soccer team in Thailand decides to explore a cave after practice one day when sudden heavy rainfall leaves them stranded by floods. Missing for two weeks and cut off by rising flood waters, the players (ranging in age from 11 to 16) and their coach, are found by British divers Richard Stanton and John Volanthen. The multiple-day international rescue effort to bring the boys to safety was straight out of Hollywood and destined for the movies – and with Ron Howard directing a cast led by Viggo Mortenson (pictured, left, as Stanton) and Colin Farrell (pictured, right, as Volanthen), it’s the kind of film destined to become a classic. VIP Fan Auctions is now offering props and wardrobe from Thirteen Lives – including the unmistakable diving helmets with flashlights worn on-screen by Mortenson (click here for photos and more information) and Ferrell (click here). Check out the film and view all the available items from the most thrilling movie adventure of the summer at the official Thirteen Lives auction site today!