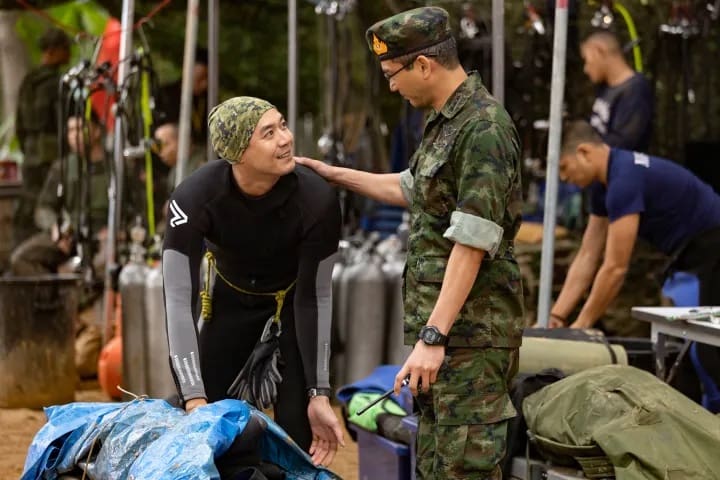 The true story of the 2018 Tham Luang cave rescue depicted in the Ron Howard film Thirteen Lives (now streaming on Amazon Prime Video) is nothing short of a miracle – but not everyone survived to see it. Saman Kunan, a former Thai Navy SEAL, who volunteered to assist in the rescue mission as a diver, died in the cave after delivering three air tanks; Beirut Pakbaram, who was also a Thai Navy SEAL, died a year later from a blood infection contracted during the mission. The heroics of members of the Thailand military feature prominently in Thirteen Lives, and VIP Fan Auctions is offering military wardrobe featured on-screen in the film. Pieces now available range from a Thai Royal Navy camouflage jacket and hat (click here for photos and more) and Navy shirts (click here) to Thai Army shirts, hats and boots (click here) and other gear (click here). Perhaps most notably is the photo and drawing of Saman Kunan (played by Sukollawat Kanarot, pictured left) featured on-screen (click here), as well as the hat he wears in the photo, his wetsuit and more from the set of Thirteen Lives. Check out all the available wardrobe and props before this auction ends!