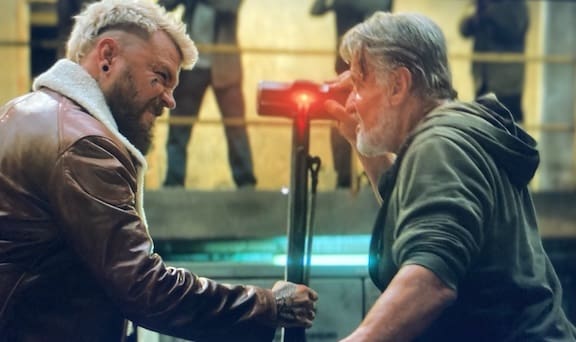 Fans of the new Sylvester Stallone superhero flick Samaritan (now streaming on Amazon Prime Video) know the legend: Twin brothers – both freakishly strong – who became sworn enemies after their parents were killed by the citizens of Granite City… One brother, Samaritan, grew to fight for justice, to be a protector. Nemesis, consumed by revenge, wanted the world to suffer as his parents did. Samaritan tried to contain his brother’s fury, so Nemesis forged a powerful weapon – “a hammer that he poured all his hate and rage into.” It was the only thing that could destroy Samaritan – but did it? Not much was found in the aftermath of the brothers’ final explosive showdown at the power plant – except their masks and the fabled hammer. Now that 38-in. sledge hammer – designed by the special effects gurus at Weta warehouse and featured on-screen in Samaritan – is in the hands of VIP Fan Auctions and available to the fan who places the winning bid! There are actually four versions of the Nemesis prop hammer used in filming that are currently available:

Nemesis hammer with strap (and carrying case) that was used by Stallone and designed by the special effects gurus at Weta warehouse, this heavy version of the hammer, constructed from metal and cotton. Click here for photos and more information.

Nemesis stunt hammer with a strap that used by Stallone when his character takes the weapon from Cyrus and uses it to take down the criminal’s henchmen. This version is constructed of foam, rubber and cotton. Click here for photos and more information.

Nemesis stunt hammer used by Stallone when his character reveals his true identity – constructed of foam, rubber and cotton. Click here for photos and more information.

Nemesis stunt hammer stolen by Cyrus (Pilou Asbæk) when he finds it in the Granite City Police evidence locker. This version is constructed of hard rubber – click here for photos and more information.

Visit the official Samaritan auction site today to check out all the amazing props and wardrobe from the movie! This auction ends this week.