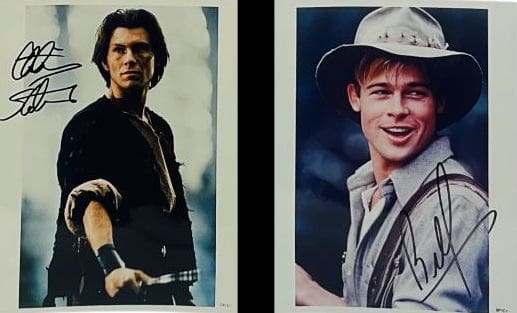 The 1990s was a phenomenal decade in the world of entertainment. The period marked the debut of classics from Pulp Fiction to Forrest Gump, Harry Potter to Deadpool, Grunge music to the Macarena (okay, so calling the Macarena a classic might be a stretch) – and it had staying power (has anyone NOT scene reruns of Friends on various channels?). The Winter Entertainment Memorabilia Auction powered by VIP Fan Auctions has its share of collectibles form the 90s as well. Check out the items below – and join the bidding before the event closes on Dec. 8!

Mighty Morphin’ Power Rangers: The yellow vest worn onscreen by Tracy Lynn Cruz as Turbo, aka the “Yellow Power Ranger” is ready to morph into your collection (click here for photos and more information).

NYPD Blue: The ABC police drama was groundbreaking when it debuted in 1993, winning 20 Emmy Awards during its 12 seasons on the air – and it was Dennis Franz’s complicated cop, Andy Sipowicz, that led the way. His NYPD police patches and screen-used “detective” business cards are on the auction block (click here).

Superstars: It can be argued that Brad Pitt is a national treasure whose amazing career took off in 1991 with the release of Thelma and Louise. Among the items available is a collection of autographed photos, including one of Pitt (pictured) from the 1992 film A River Runs Through It. Click here for more information – and to see all the autographed photos (including ‘90s icon Christian Slater, pictured), which are also included.

Visit the 2022 Winter Entertainment Memorabilia Auction powered by VIP Fan Auctions and claim a piece of Hollywood history before time runs out!