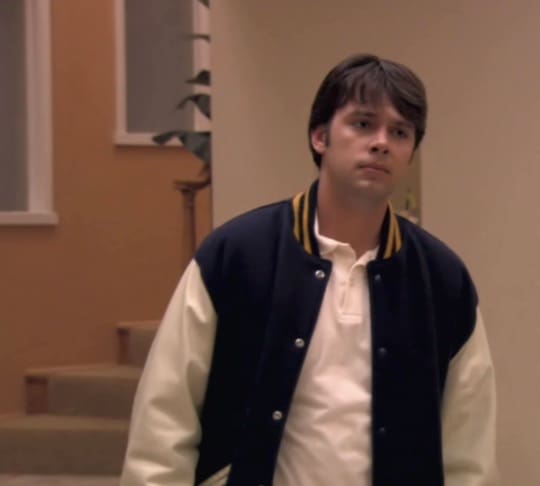 Arrested Development is the story of a wealthy family who lost everything, and the one son who had no choice but to keep them all together. No television comedy has as dedicated a fan base, as evidenced by its five seasons spread across 17 years, the irreverent, self-referential series loaded with brilliant callbacks, foreshadowing, silliness and razor-sharp wit. VIP Fan Auctions is now offering Arrested Development fanatics an opportunity to own a distinctive piece of the series in the form of the letterman jacket (pictured) worn onscreen by third-year senior Steve Holt (Justin Grant Wade). With his infectious catchprase (“Steve Holt!”), he captured the hearts of both Maeby (Alia Shawkat) and GOB (Will Arnett) – who later learns that he is lovable moron jock’s father. If you’re on the fence about about whether to bid on this Arrested artifact, listen to the immortal words of Steve Holt: “Don’t ask ‘can I?’ Ask ‘I can!’ You can control your bladder when you’re dead. No blood, no oil! There’s no ‘I’ in ‘win.’”  We couldn’t have said it better ourselves! For more information and to join the bidding on Steve’s jacket, click here!

Check out all the amazing props, wardrobe and more at VIP’s Fall 2021 Entertainment Memorabilia Auction!