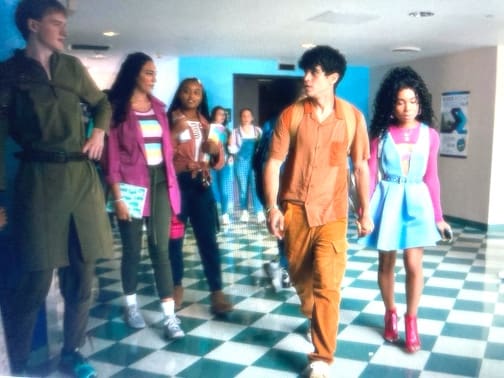 Anything’s Possible knows that Gen Z kids are smart and savvy, but Khal is wise beyond his years. Doling out advice on Reddit like a modern-day Ann Landers (an advice columnist back when newspapers were still a thing), one of his most memorable recommendations was to a young man (Fenric Mossgleam, played by Benjamin Cummings) who was nervous about sharing his quirky hobby LARPing (live-action role playing) as a “high elf” (pictured at left) with his girlfriend. The advice was solid – turns out Mossgleam’s girlfriend was into it (click here for her elf costume) – and so is the fact that VIP Fan Auctions is offering Mossgleam’s screen-worn tunic, pants, pauldron and belt (click here) to the fan (or LARPer) who casts the magic bid!

You don’t have to be a LARPer to find some of the truly amazing screen-worn styles from Anything’s Possible – visit the movie’s auction site and check out all the mind-blowing outfits now available!