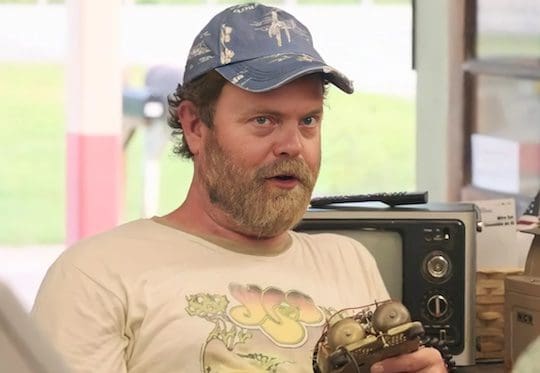 Rainn Wilson became a household name as the persnickety Dwight Schrute on The Office, but his prior and subsequent roles have shown the actor’s tremendous range. He’s played everything from aliens to undertakers to rock stars and beyond – always bringing something to make the role stand out from the rest. Wilson continues his streak of interesting characters in Jerry & Marge Go Large as Bill, the slacker clerk/owner of the Liquor Hut (and narrator of the movie), who allows the Selbees to use his lottery machine to churn out massive amounts of tickets. Now VIP Fan Auctions is giving fans a chance to claim a piece of Rainn Wilson’s filmography by offering his colorful wardrobe worn on-screen in Jerry & Marge Go Large. Click here for photos and more information on the Genesis tee-shirt, Budweiser visor and yellow hoodie from the film. Also available is the Yes tee-shirt, orange button-up shirt, shorts and sandals (click here), and his Hawaiian shirt, (a different) Yes shirt and hat (pictured – click here). Visit the Jerry & Marge Go Large auction site for these outfits and much more – but act fast because this round of auctions is ending soon!