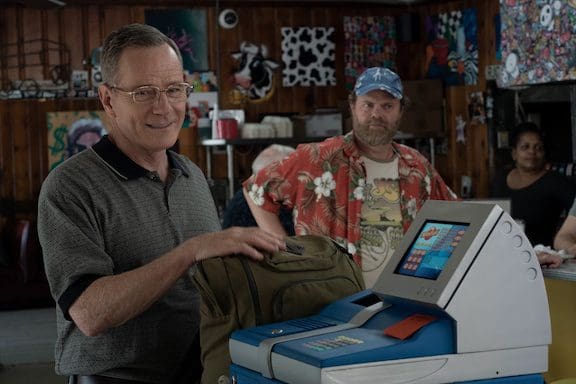 Once Jerry Selbee (played by Bryan Cranston) solved the math on how to guarantee regular Winfall lottery payouts, his biggest challenge became time since the lottery machines could only print a limited amount each day. The Paramount+ streamer Jerry & Marge Go Large tells the story of the real-life people who capitalized on the lottery loophole to revitalize their small town – with the help of Liquor Hut owner Bill Madres (played by Rainn Wilson), who allowed the Selbees to commandeer his store’s lottery ticket machine. VIP Fan Auctions is now offering one of the Winfall ticket machines used on-screen – this one from Leon’s gas station) to the fan who places the winning bid (click here for photos and more information). Also available is the new Fantasy 5 lottery machine (click here) from Leon’s gas station, which is brought in to replace Winfall and prompting the Selbees to make the trip to the Liquor Hut in Massachusetts to keep their jackpots coming! Grab a signature prop lottery machine – and numeous other props and wardrobe items from the movie – at the Jerry & Marge Go Large auction site today and bring home your own jackpot!